Two Days in the Desert with a Gypsy Kitchen Chef

It was late October when we caught up with Brittany Griffith for a weekend of grilling, camping, and climbing. The pro climber travels roughly 250 days a year. Sometimes she’s a half day away. Sometimes she's half a world away. But rarely is she sitting still.

There in the desert just east of Moab, with her Nexgrill 2-Burner Table Top Grill, the ‘Gypsy Kitchen’ chef shared stories of her climbing adventures around the world, her love of cooking, and her deep-felt connection with the outdoors. And after two days of laughing, climbing, grilling, and eating together, we came away thinking one thing: for someone whose career involves insane altitudes, Brittany Griffith is remarkably down to earth. 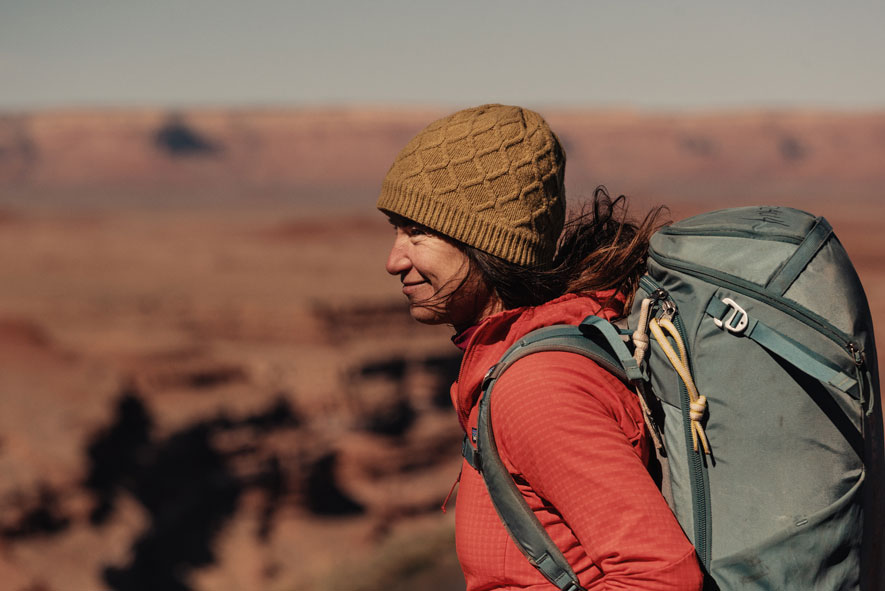 Growing up in Iowa, Brittany Griffith never aspired to be a pro climber. Yet today her name is ubiquitous with the sport. She’s been on the world-climbing circuit for decades. She’s been profiled by virtually every major press outlet in climbing. She’s put up first ascents around the globe, and she’s climbed in at least 65 different countries.

“I do all kinds of climbing, from bouldering to ice climbing to alpine climbing, climbing above the sea,” says Brittany, “but my favorite, and I think why I landed in Utah, is I love being in the desert. I like the landscape, I like the starkness, and how things grow despite harsh environments.”

"Climbing is just an excuse to travel, and to be exposed to other cultures."

After a short while together, it’s abundantly clear that Brittany loves to climb, but the real joy for her, she says, comes more from the lifelong connections she’s made along the way.

“The thing I appreciate most with climbing is not just the exercise part of it, but the relationships that you form with people in the community,” says Brittany. “I've traveled to 65 countries climbing. [It] gives me a reason to go to these far flung, off-the-beaten-track countries. I've climbed in Yemen, Algeria, Sudan, Iran… places that I don't know if I would choose to go to if it wasn't for climbing.”

The Road Trip that Never Ended

In Mexican Hat, Utah, a stretch of desert along the northern edge of the Navajo Nation’s borders, Brittany struck up her grill and took us back to where it all began…

“The first day I ever went climbing was the first day of a road trip that never really ended,” she says. “At the time I just wanted to see the West… I put all my things in storage and got in the truck.”

“I had never climbed before. I read a book called How to Rock Climb from cover-to-cover on the drive across Nebraska. And by the time we got there, I knew how to equalize an anchor, tie a figure eight, and use my feet.”

After that first trip, Brittany never looked back. She would make her way from destination to destination, surviving on what little she had, and what skills she had learned along the way.

“For those first lean years, when I first started climbing full time, I didn't have a lot of money. I didn't have a house. I didn't have a van. I relied on people letting me into their homes, but I never wanted to free load. And so one of the things that I could do was cook for them.”

"The first day I ever went climbing was the first day of a road trip that never really ended."

A Lifetime of Preparation

As English muffin breakfast sandwiches sizzle on her Nexgrill, Brittany points to a canister she brought along.“In my kit I have the essentials, like my knives, a whisk, a spoon, chopsticks, but I also have this quiver of spices… It's usually paprika, cayenne, salt, powdered garlic, and it sounds lame, but Italian seasoning. No one's palette dislikes Italian seasoning.”

Planning resources and provisions is a precious skill for climbers. On any given trip, you could be away for a weekend or away for weeks, with nothing to rely on but your climbing partners and your wits. 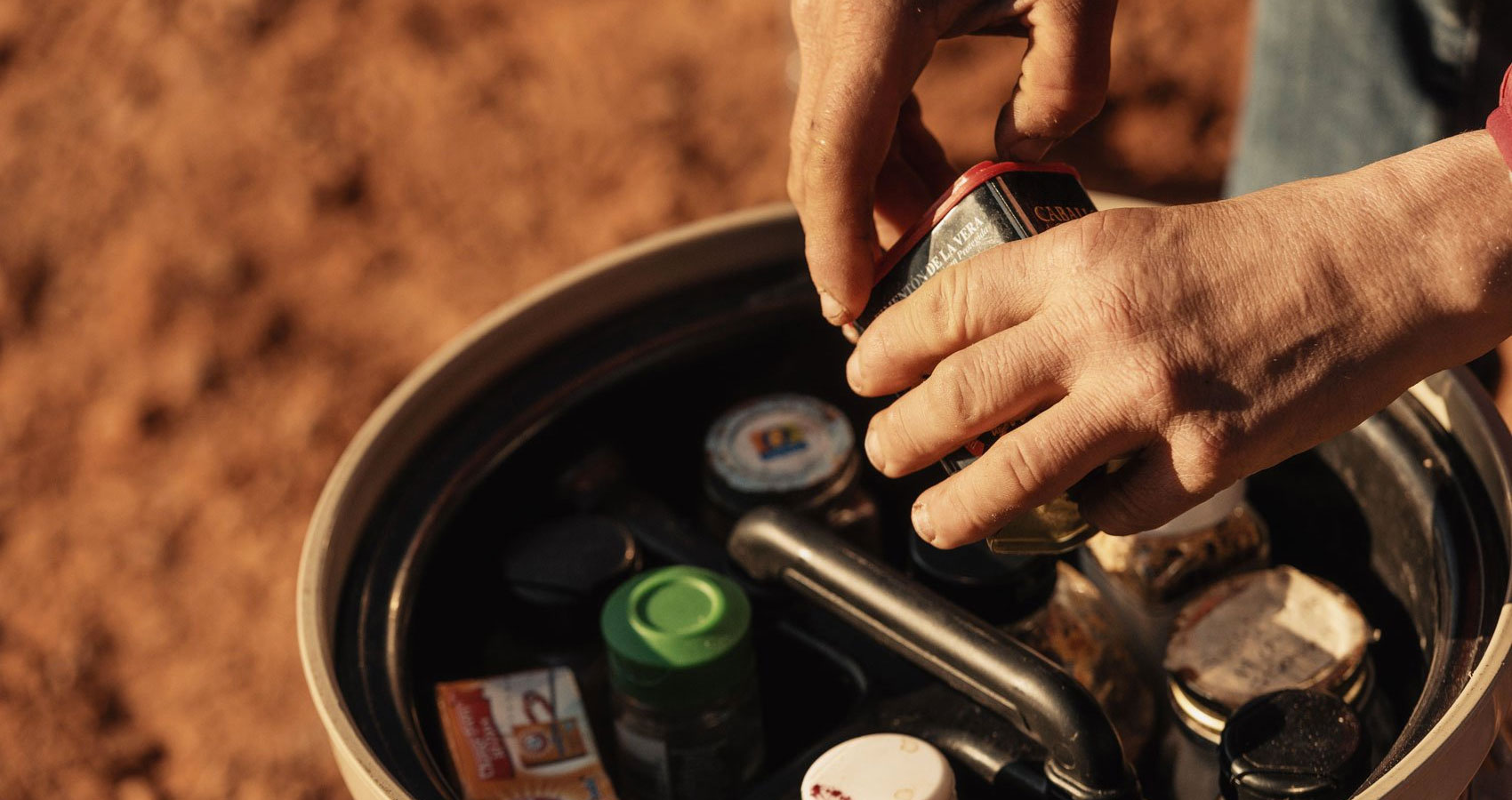 Planning resources and provisions is a precious skill for climbers. On any given trip, you could be away for a weekend or away for weeks, with nothing to rely on but your climbing partners and your wits.

“There's been times in the back country and in the wild, like we ran out of food and we had to eat blueberries for two days,” she says. That’s why on climbing expeditions, everyone has a job.

But being resourceful comes naturally for the Midwest native. She grew up around farms in Iowa and Missouri, detassling corn and walking beans. During camping trips, her grandfather taught her how to hunt squirrels and snakes, how to fish, and how forage. “We gigged for frogs too,” she says behind a grin.

“When you grow up around agriculture, it gives you a very real sense of where your food comes from… Being resourceful with food and preparing food brings people together in this way that nothing else does really.”

Traveling, foraging, and cooking outdoors becomes a way of life for the professional climber–a lifestyle Brittany admits is perfectly fine with her.

“One of my favorite things to do, especially when my garden is in full swing in late summer, is cook the food I get from my garden outside and have a meal with food that’s never been inside,” she says. “That's one of the parts about being outside I really appreciate is foraging… finding food that's growing right there.”

“The way I cook, I like to refer to it kind of as a Gypsy Kitchen because the way I cook travels with me and brings people together in this kind of common culture, like nomadic,” says Brittany. “My kitchen can be in my tent, in a hotel room, on a portaledge hanging off the side of a mountain, and it's all about just making do with what's around… I can make food with almost anything. And that's a lot of the fun for me too, is figuring stuff out.” 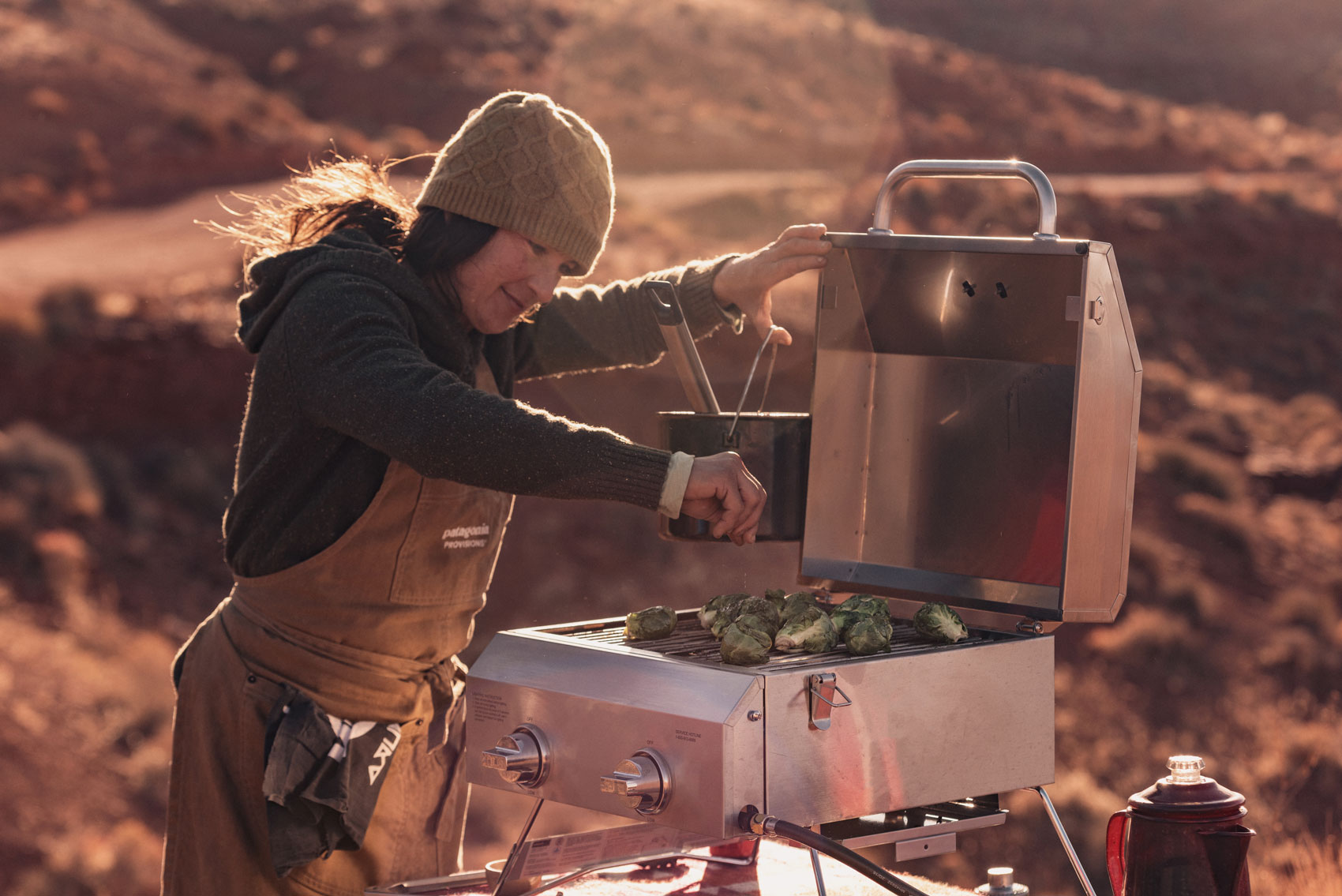 "I could make quesadillas going 75 miles an hour down the freeway with a blow torch.”

Climbing with One of Climbing’s Best

That day, we hiked to the base of Mexican Hat, stoked to reach the tower summit. One or two of us had some experience climbing. The rest of us, not so much. Yet we were all determined to see it through. After all, how often do you get a chance to climb with Brittany freakin’ Griffith? 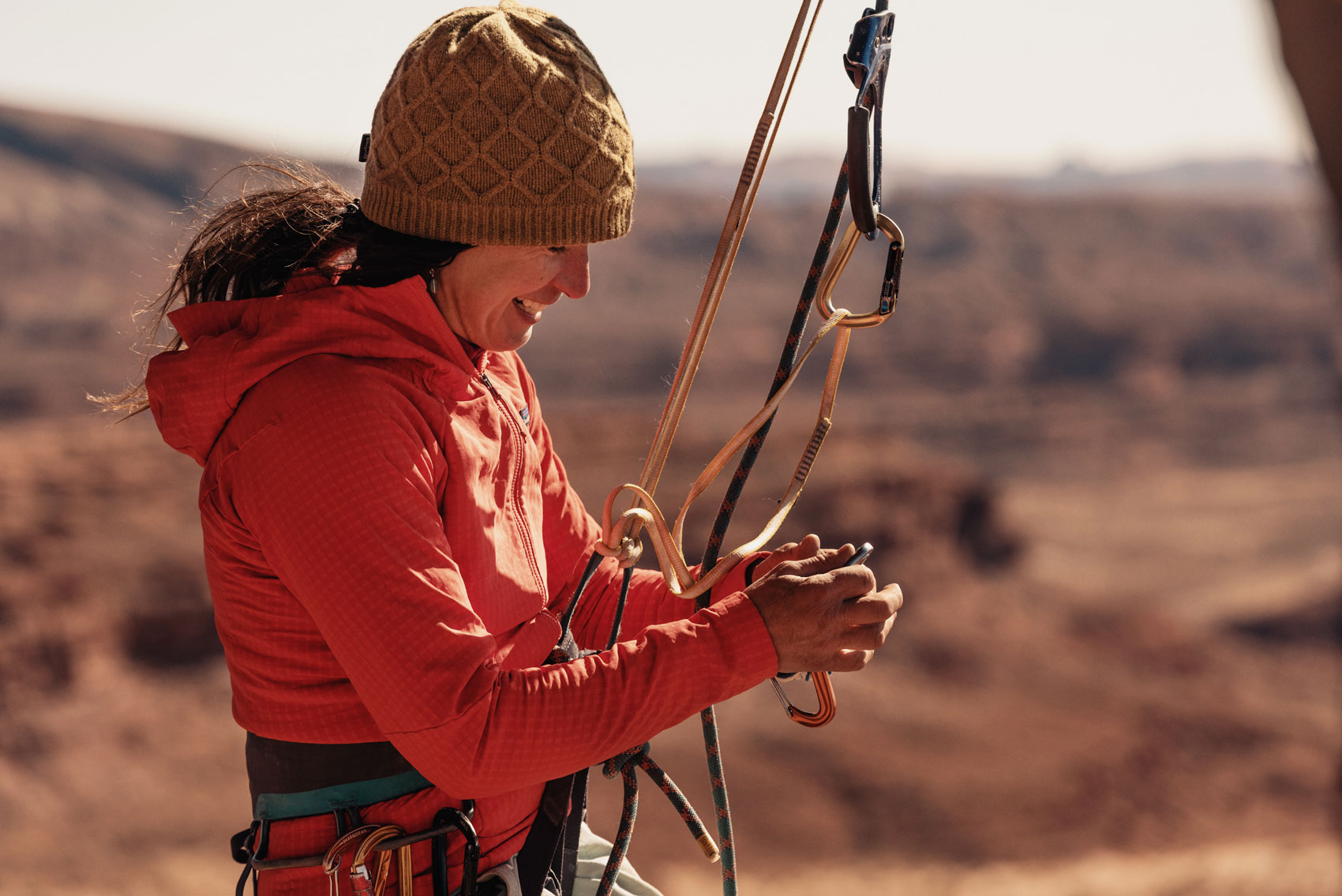 After straining up the desert tower, fueled by adrenaline and the desire not to look foolish in front of a pro, Brittany offered some reassurance.

Grilling Back At Camp

Back at camp, the sun had began its descent when Brittany again reached for her quiver of spices. The menu that night featured marinated ribeyes and brussels sprouts–not exactly a foraged meal, but a welcome site for five amateur climbers. While she fired up her Nexgrill 2-Burner Table Top, we huddled around the campfire and quizzed her about her most memorable dishes.

She shared stories about experimenting on her Easy-Bake Oven at age 6, making her first Thanksgiving meal at 12, cooking for 125 guests at a friend’s wedding, bonding over her pasta con le sarde recipe with a complete stranger in Jordan, and her secret weapon: a peanut-based sauce she scrapped together during a road trip to Yosemite.

“Climbing is my life, but cooking is my passion. I could sooner give up climbing, than I could give up cooking,” she says. “It's the way I can show people like, affection and care for them… through preparing food.” 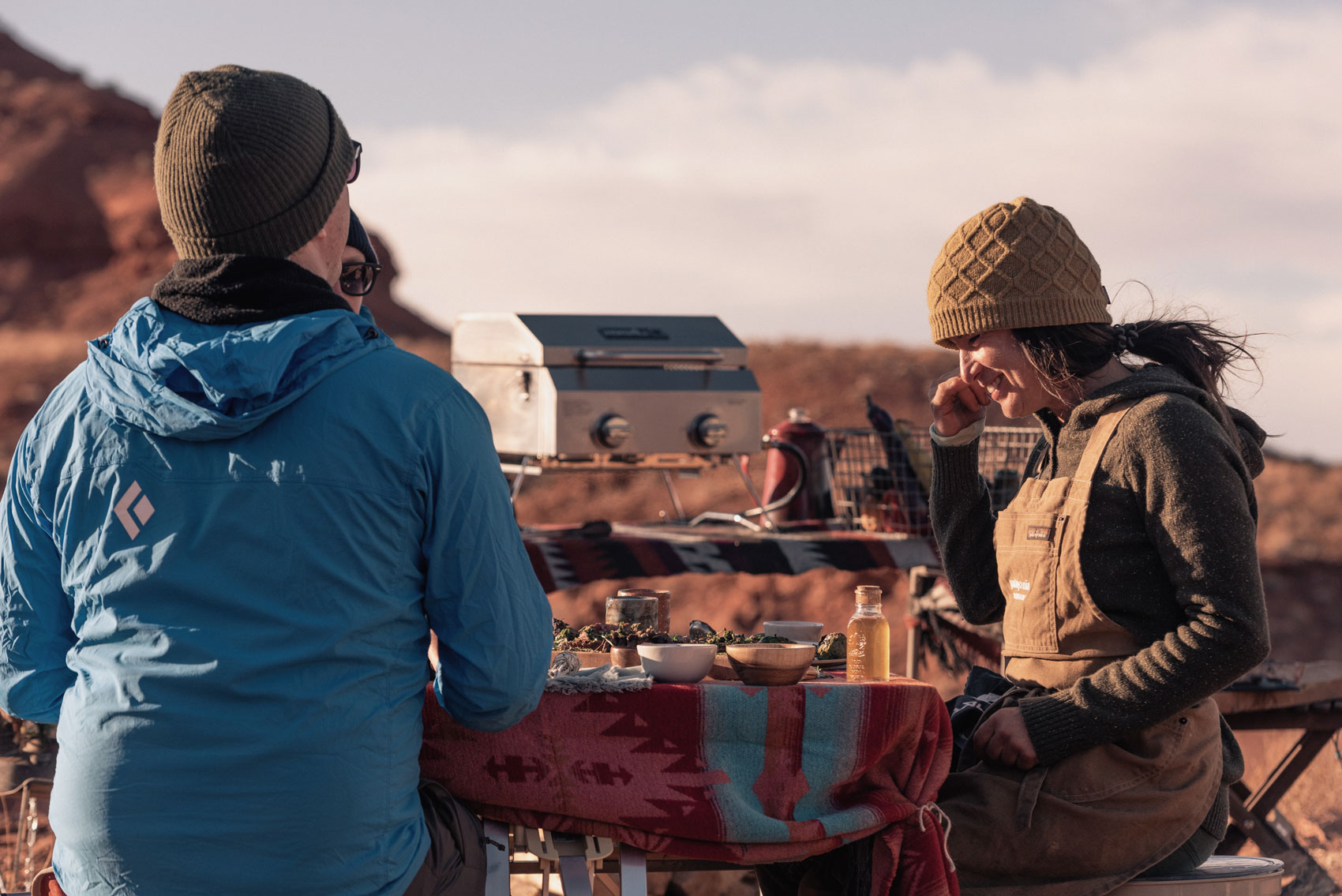 "When you grill, it brings back that feeling… it's primal”

“Sometimes I'm in areas where I can't have an open fire, so a grill like this is perfect… It's little bit more versatile,” she says. “I think grilling out here is more rewarding than grilling in my backyard. Because you do have to be more resourceful. Like I'll boil a pot of water on top of the grill, I'll put bacon on it, I'll put cheese, I'll put the eggs.” 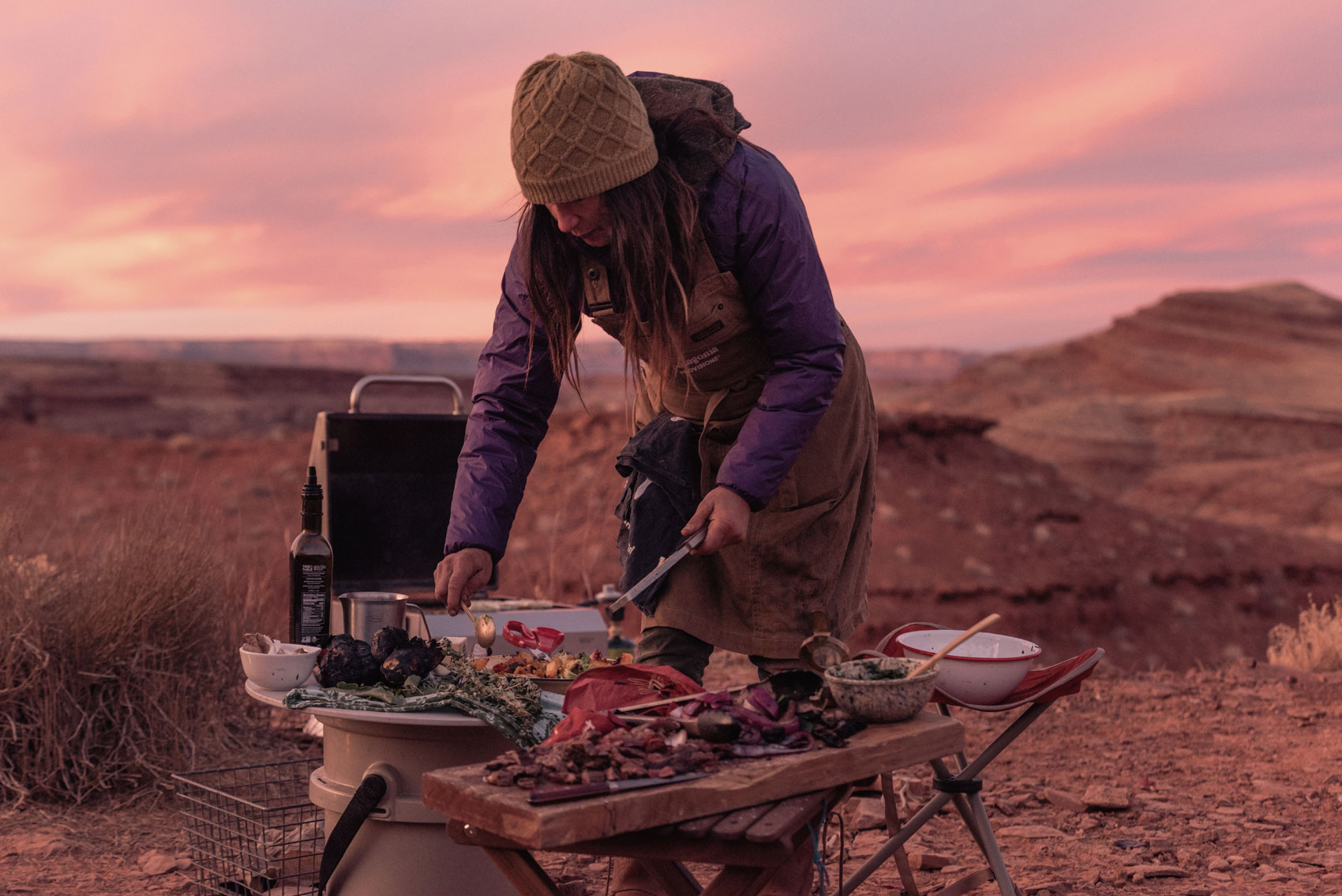 As the camp fire died down, something Brittany said early on played back in my ears. “Climbing's introduced me to a lot of different people and cultures,” she said, “but food has actually opened doors and allowed me to see inside people lives in a way I wouldn't have otherwise been able to.”

In our own small way, we learned just how true that statement is. We had just spent a day climbing with one of the best in the world–someone we’d only met by phone a few weeks earlier. But with bellies full of good food, it felt like we’d been hanging together for years. 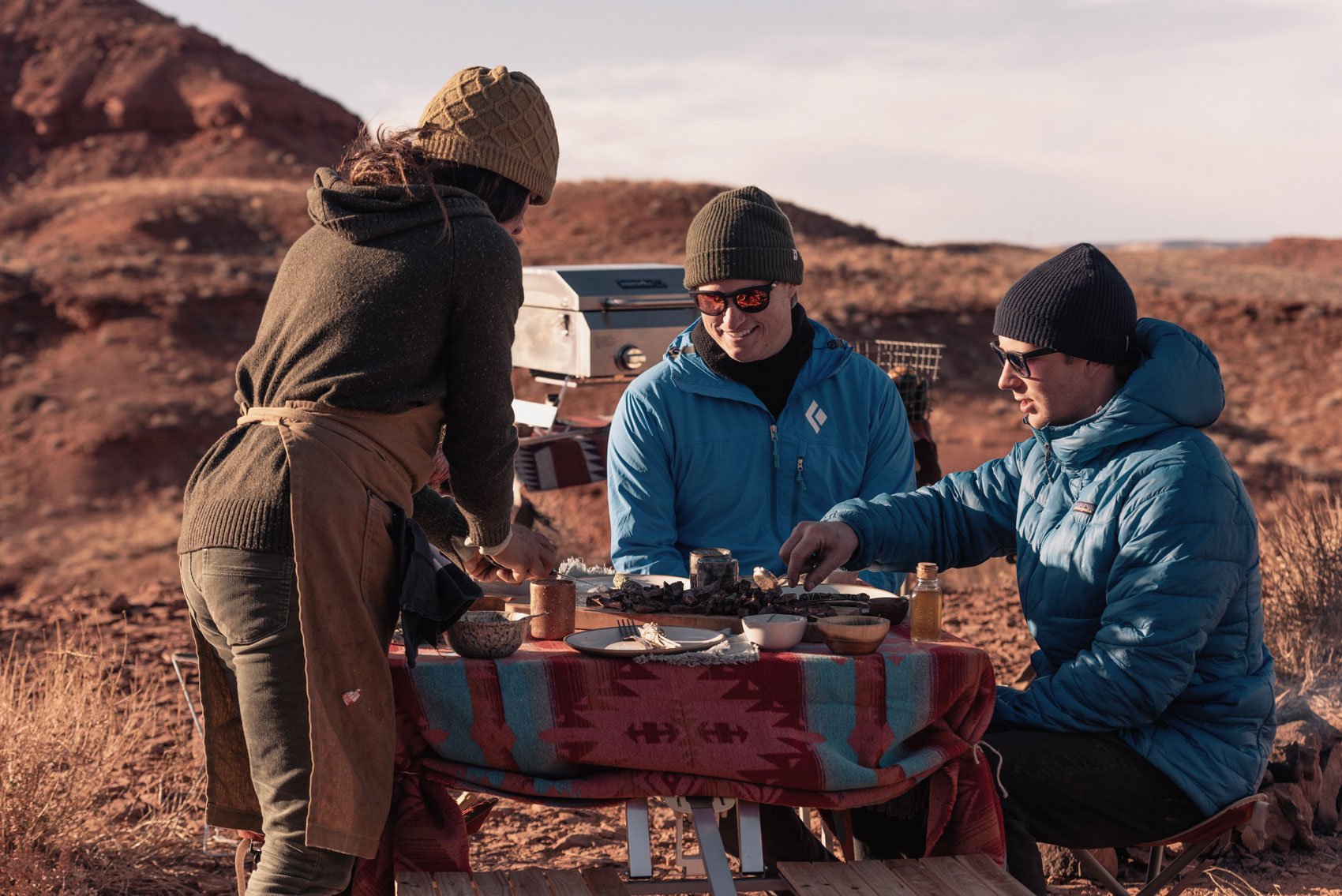 Long after we parted ways with Brittany, we’re still struck by how down-to-earth she was. Here was a woman whose career had reached enormous heights, both literally and figuratively. Yet in the desert, by the fire, and over the grill, she was more grounded than we ever imagined.

Like a road trip that never ends, her approach to life is an ongoing journey of discovery. She’s diverse and unafraid, and embraces the unknown with uncommon enthusiasm. She’s a resourceful and imaginative chef, always hungry for something new and different. And her heart is much larger than her 5’3” frame suggests.

“My exercise, climbing, is dangerous and scary, and makes me anxious and worried about my partner and myself. But back at camp, or in the kitchen cooking, I'm never afraid. It's like… you can't screw up cooking for someone. If it's made with love and intentions, it's okay, it's good.” 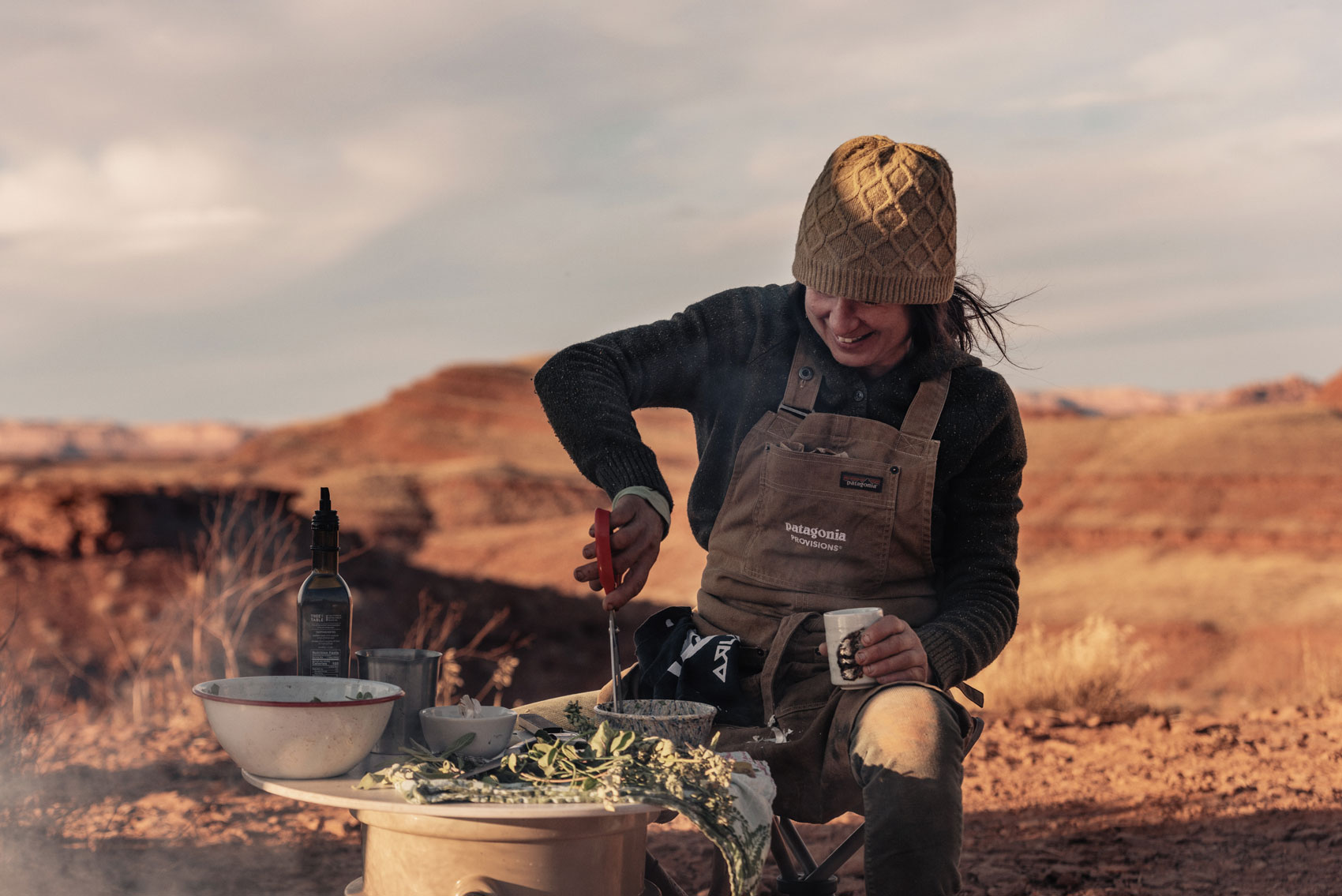 A towering THANK YOU to Brittany Griffith, Nathan Maples, and Nexgrill for making this story possible.