A British Football Fan’s Journey to the Ultimate NFL Tailgate

Christopher Barlett-Walford is an A Capella singer from London who also happens to be massive Jacksonville Jaguars fan. About a week after Christopher learned he’d been selected to attend Nexgrill’s Ultimate Tailgate at his first-ever Jags home game, he was on a plane bound for #DUUUVAL County, U.S.A.

Nexgrill caught up with Christopher and his lovely wife, Jessica, at the Ultimate Tailgate to talk about soggy sausages, the cultural differences between American and European football, and you guessed it – grilling. 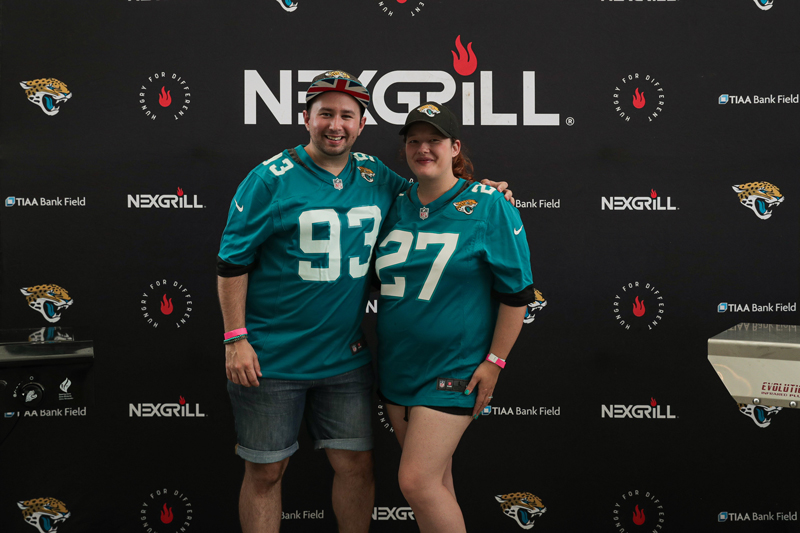 NG: You made it! Walk us through the events that led up to you being here in Jacksonville. How did all this happen?

Christopher: It’s been a whirlwind. I saw on Facebook that the Jags were running a global ambassador competition and they were looking for someone from London to show their passion for the Jags and to come over for a game. Long story short, I clicked on the thing and when I found out later that I’d been chosen, I swore an awful lot. My wife thought I’d broken my leg.

Jessica: I thought something bad had happened! And then I came running down and he was like, “We’ve won, we’ve won!”

Christopher: That was kind of it, yeah. And then it’s been a bit of a blur the past two weeks.

NG: How did you first become a fan of the NFL?

Christopher: I’ve always watched the Super Bowl when it airs on British TV. Seems like it’s always the Patriots for some reason. For a long time, I didn’t really have an allegiance to any one team. Then when the Jags came over to play the 49ers in London one year, I went to that game with a friend. The 49ers wound up destroying the Jaguars, but when we scored late in the game, a sort of sarcastic applause went around. And I was like, do you know what? They’re my team now. I don’t think I even knew where Jacksonville was.

NG: Do you have favorite Jags players?

Christopher: There’s a leadership figure in Calais Campbell. When Pos [Paul Posluszny] retired, you could tell that they’ve lost a leader and Calais almost instantly replaced him. And Fournette’s amazing, too, isn’t he? He’s a bit of a bulldozer. I think what we really like about him is his attitude has changed this year. He had a really rough off-season, so to acknowledge a change in yourself like, “I wasn’t enough as a person,” is amazing, and it’s paying off on the field.

"Earlier on, some Jets fans came by the tailgate specifically to be booed – but it’s all love! As soon as the game finishes, you’re going to have a beer and a chat and you’ll hear each other’s story.”

NG: Are you a fan of European football as well?

Christopher: Yeah, I’ve been a Manchester United fan since I was a kid.

NG: How does the tailgating back home compare to what you’ve experienced here in Jacksonville?

Christopher: Yeah, it doesn’t, really. You’d go to a pub, maybe, but there isn’t any tailgating. We don’t really go to “soccer” football games though. It’s a totally different atmosphere and it’s not as welcoming for some reason.

Jessica: Our lot back home can get a bit too rowdy in the wrong way. Here in the States, I don’t think it’s just about the football. It’s about everybody enjoying themselves and having fun.

Christopher: Right! Earlier on, some Jets fans came by the tailgate specifically to be booed – but it’s all love! As soon as the game finishes, you’re going to have a beer and a chat and you’ll hear each other’s story. 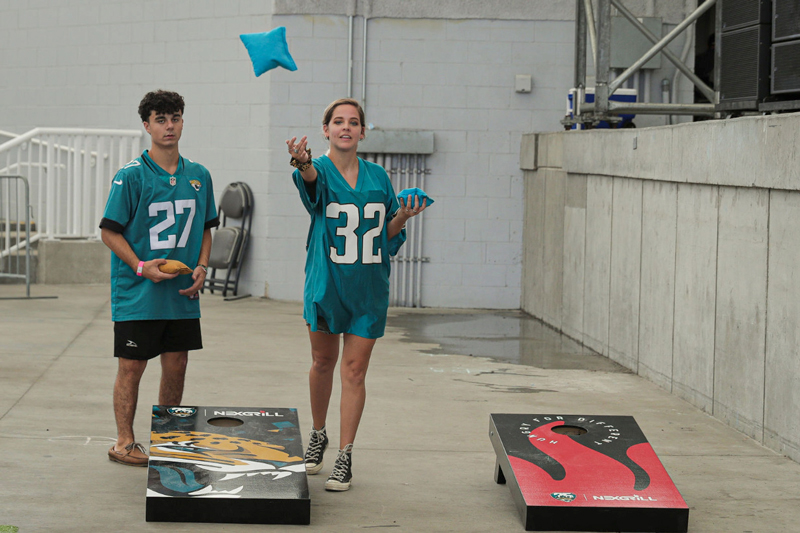 NG: What else makes the NFL different from European football?

Christopher: What I quite like about American football is that as a family, you inherit your team. In Britain, there are households where one person’s an Arsenal fan, another is a Spurs fan… how they manage to get on, I don’t know. But my little boy already has his Jags gear. He’s already a fan whether he likes it or not!

NG: So, no tailgating back home. What do you think of all this?

Christopher: I mean, it’s mad, isn’t it? Breakfast beers? If you have breakfast beers in London, you’ve got a problem. But really, it’s great. We’ve met people that we’ve spoken to for four or five years now – people we’ve never met in person before. To actually give them a hug and say hello over a drink and this delicious food has been just a delight.

Christopher: Lovely guy. I think the fact that he realized that we’d left our little baby at home to come over here was sweet. I think he must identify with that as a fellow dad.

Christopher: So, in Britain, you’ve got a three-week period in the summer, and if it doesn’t rain, you go for it. It’s a very British thing. “Oh, the sun’s out. Quick! Get the BBQ out! Get the beers out!” Then it’ll probably rain away, but you still go ahead.

NG: What do you like to grill back home?

Christopher: Soggy sausages is a very British tradition. I also quite like a good pork chop or doing some chicken in the oven and finishing it off on the grill. Turkey burgers are quite nice, too. For dessert, melting some chocolate and making s’mores. So, basically everything?

NG: As you know, Nexgrill is the Official Grill of the Jacksonville Jaguars, and as a company, we champion getting out of your comfort zone and trying new things – whether it’s going to new places, trying different types of food, or meeting new people. You’ve done all of those things today. How do you feel?

Christopher: We’re definitely off the beaten track, I can tell you. As I said earlier, it’s been an absolute whirlwind. We didn’t have much time to plan or even realize it was happening. Now all of sudden, we’re here. Even when we got on the plane at Heathrow we thought this was some big joke. You see these competitions where it’s a once-in-a-lifetime opportunity and you think, aw, no one wins that. But they do, because we did! I really can’t even begin to tell you how much all of this means. The Jaguars are friends for life.

A huge thanks to Christopher and Jessica for not only making the long trip to Jacksonville, but also for stepping away from the fun to chat with us. The pleasure was all ours.

If you don’t already, follow us on social media and fill us in on all your grilling adventures using #EveryonesInvited. We promise to keep you up to date with all our latest grill tips, stories, recipes, and more – everything you need to stay satisfied between cookouts.